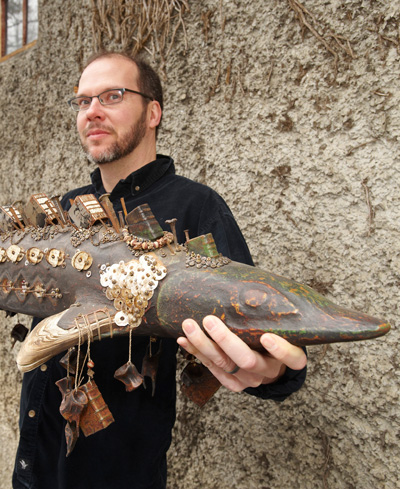 I got into bookbinding while studying photography at the University of South Illinois at Carbondale. One of my professors, Chuck Swedlund, hired me as his graduate assistant on his photographic caving expeditions. I carried equipment, held strobes, and fired off flash bulbs for Chuck and other cave photographers. For several months we worked almost every day underground. During the long stretches of inactivity, I searched for fossils and cave life and took photographs of my own. I also spent a lot of time wandering above ground, collecting images of melting ice, weathered rocks, eroding soil, and rotting trees. I found myself gravitating towards the colors of decay, the beauty of aging. I kept an eye out for Native American petroglyphs, abstract designs or images of footprints or animals and became good at finding them. These places seemed sacred to me.

One of the first books I made- this was before I knew how to bind- was an altered book, printed in Greek. I glued the pages together, and they were so brittle that I could scrape out a Native American rock painting that I often saw in Southern Illinois. Another time I found a little newt, a red eft, that had been flattened by a car on the road. He was dry, curled up, and so paper-thin that I preserved him between two sheets of handmade paper and mounted him in a book. It was my version of a petroglyph.

Rather than mounting my photographs on gallery walls, I decided to place them in boxes or books so that the viewer had to explore them actively, rather than just wandering past. Around this time I visited my sister Mary in Iowa City and met a friend of hers named AlBuck, who was making wooden-covered Coptic books. The binding was first used around the fourth century, in Ethiopia or North Africa, or perhaps this is just the area where the books were best preserved. Al sent me a book that he had made, along with hand-written instructions. Since I knew nothing about bookmaking or sewing or paper or woodworking, it was a challenge. The books had holes drilled vertically through the board, but other holes were drilled at angles from the edge of the board to both the inside and outside face. This perplexed me, because I didn’t know whether to use a drill press or hold the board in a vice at an angle. Al told me to clamp the board to the inside of a drawer and then drill the hole with a hand-powered drill, just eyeballing it. I was happy to learn that it was easiest to drill the holes with a simple tool that my grandfather might have used. (Bowing to convenience, I now use a metalsmith’s power drill called a flex shaft, but I still eyeball the angle.) Once I mastered the drilling, the rest of the process fell into place. Still, it took me nearly two years to make a book I was satisfied with.

What first appealed to me about Coptic books was that, unlike most hand-bound books, they open completely flat. When I put images on the pages, you could see the whole image without struggling with the binding.

My first book arts mentor was Frances Lloyd Swedlund. At the time she was a cinema and photography graduate student at Carbondale, but she also made exquisitely crafted books. A lot of people were impressed with the first boxes and books that I made, but Frances was not. The others liked the simple fact that I was making boxes and books; she saw that they were sloppily made, with no sense of craftsmanship. Frances, who had studied at the Penland School of Crafts, knew it was the place for me to learn bookmaking, and she urged Chuck (who had taught at Penland himself) to send me there. Chuck was reluctant to lose his assistant, somebody had to haul his equipment through the cave muck, but ultimately he agreed.

As I finished my degree at Carbondale, I spent my summers as a work scholarship student at Penland, and later I became a core student there. It was at Penland that I began to concentrate exclusively on Ethiopian Coptic books.

Dolph Smith helped push me beyond the simple Ethiopian book. He was making sculptural books by hanging paper from wooden structures, and I tracked him down and ultimately studied with him. Under his influence I developed my bridge books, which use the same Coptic binding but exaggerate each of the elements: the covers become elongated into two-foot-long towers that stand on a tabletop, and rather than 10 or 12 signatures in the text block, I use 100 to 200, well over 1000 pages. I can’t afford that much new paper, so to make the bridges I return to the idea of the altered book. I find books that have mangled spines and covers but good quality paper, and I use that paper in my work. Often I use old Bibles with exceptionally thin paper, which has a nice drape and flow. I like to listen to bookbinders try to justify tearing up old books, because it sometimes makes them feel a little guilty. I don’t have much of a problem with the practice, because the books I alter are not rare, and they’ve already lived their lives. Bookbinders have been recycling books for 2000 years. In some of the first Coptic books, wood was scarce, and the binders would take old papyrus scrolls and laminate many layers together to make thick book covers.

One of the first people I met at Penland was Julie Leonard, who was a resident artist there at the time. I assisted in her classes, and she helped me learn how to make a living by making production journals. These are still one-of-a-kind books, but I can make them fairly quickly and sell them for a reasonable price at shows. I’ve made hundreds over the years, and I can’t imagine stopping now. I spend so much of my time sewing books that the process is meditative. It gives me an opportunity to think about the structure of the book, and how to stretch the limits of the Coptic form.